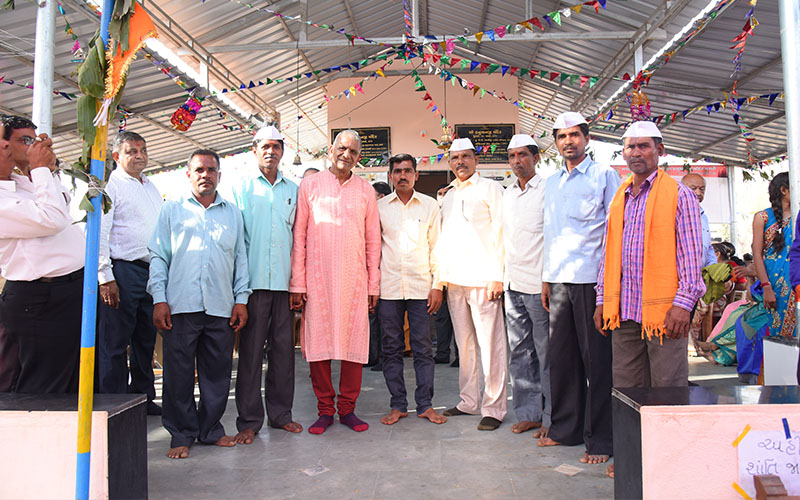 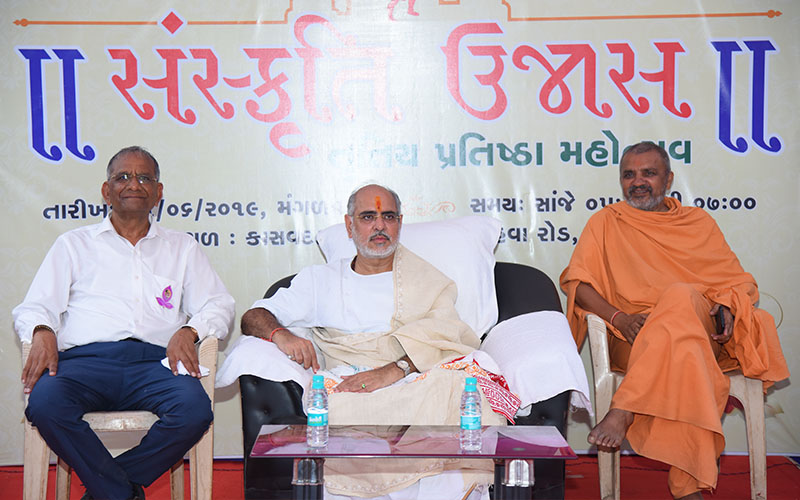 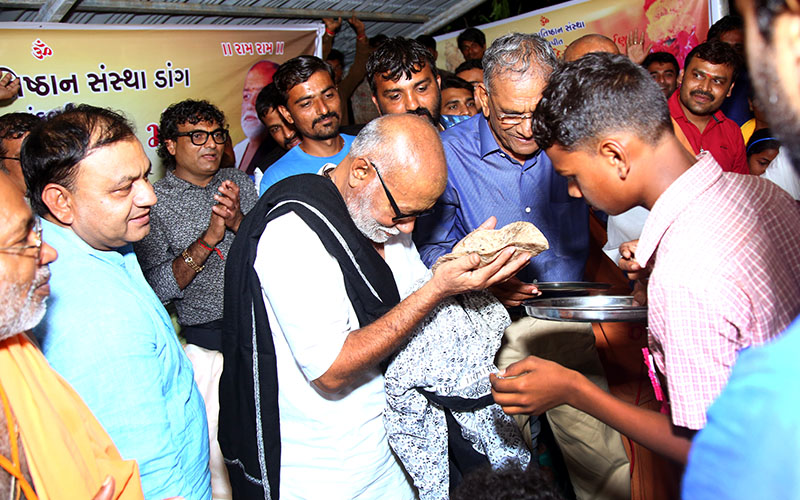 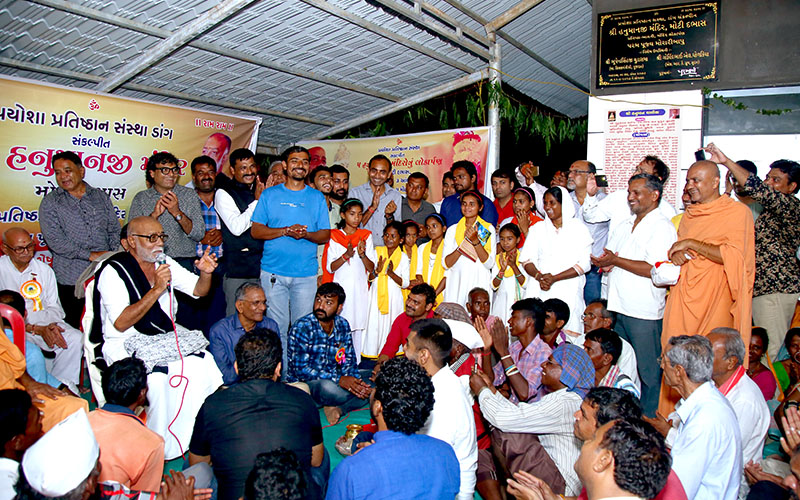 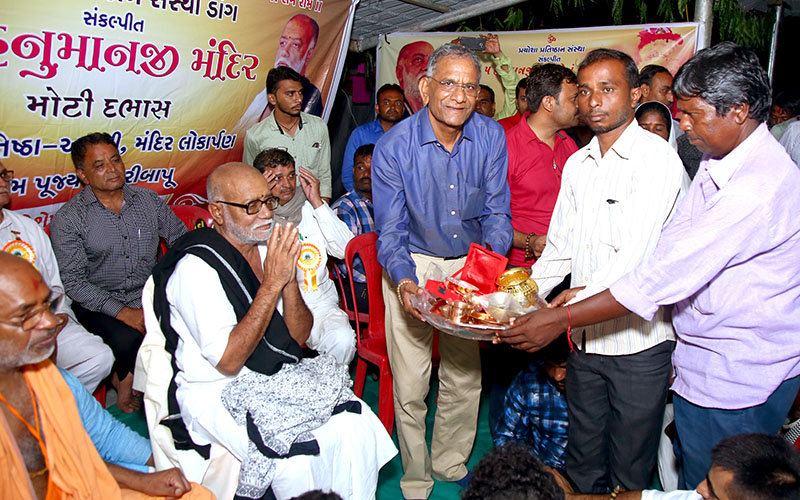 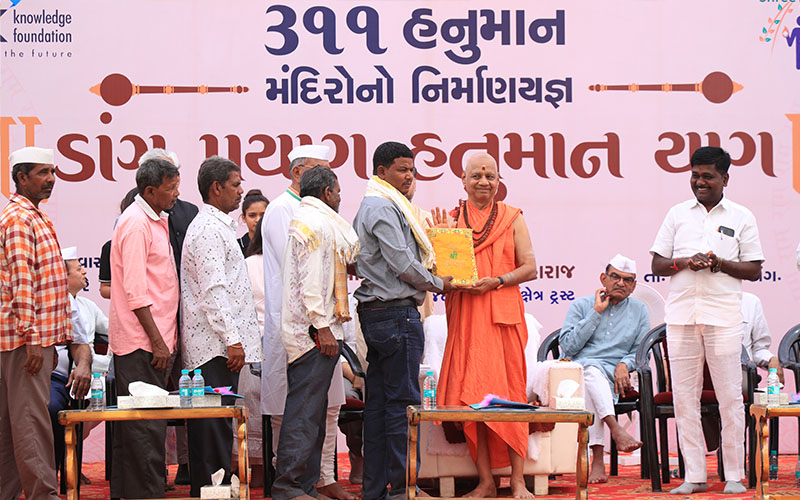 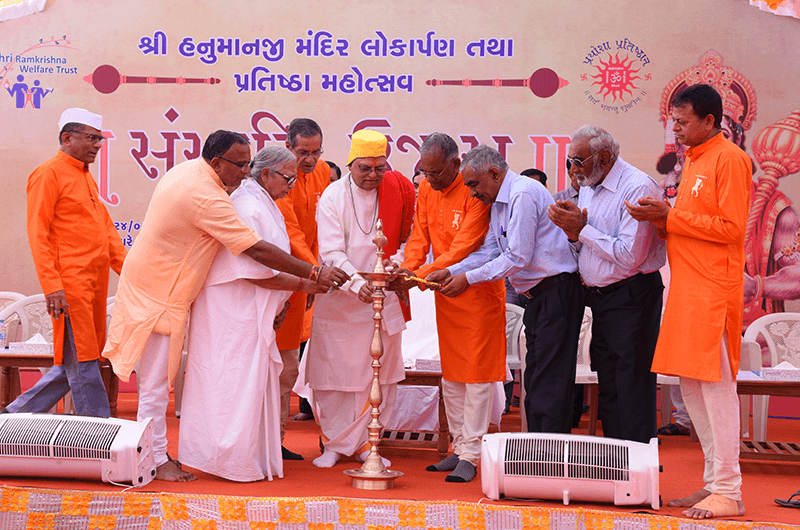 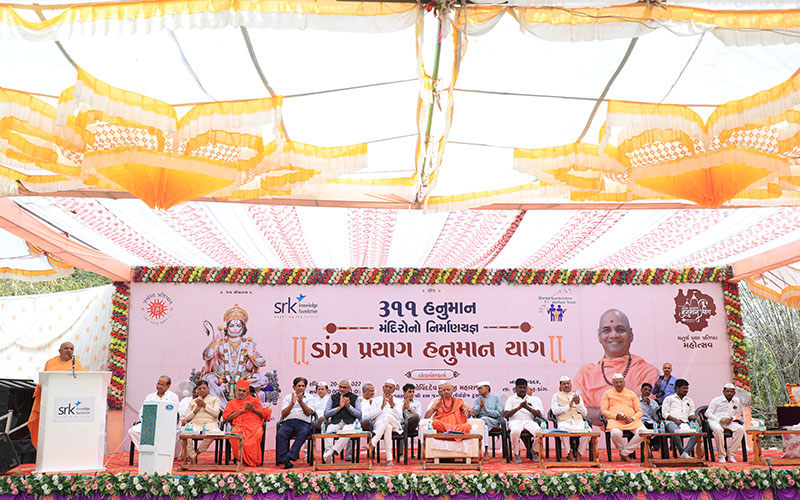 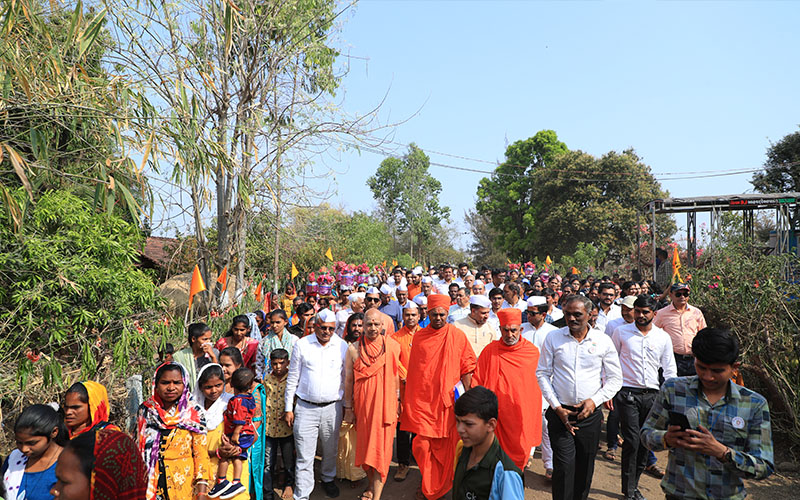 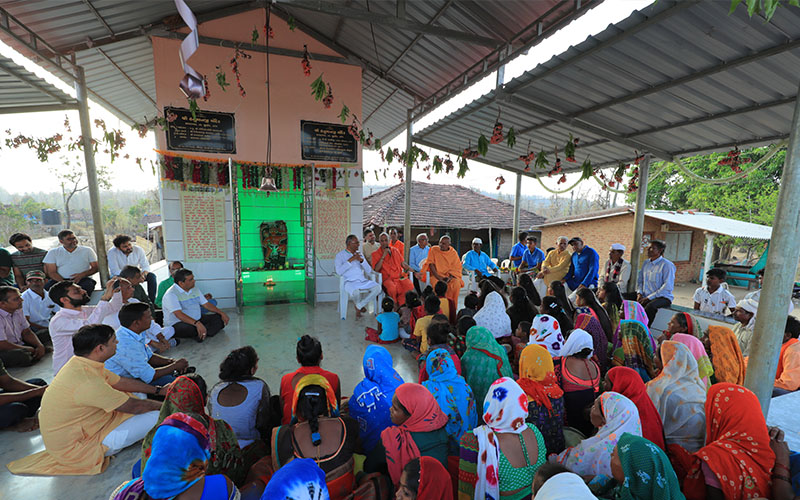 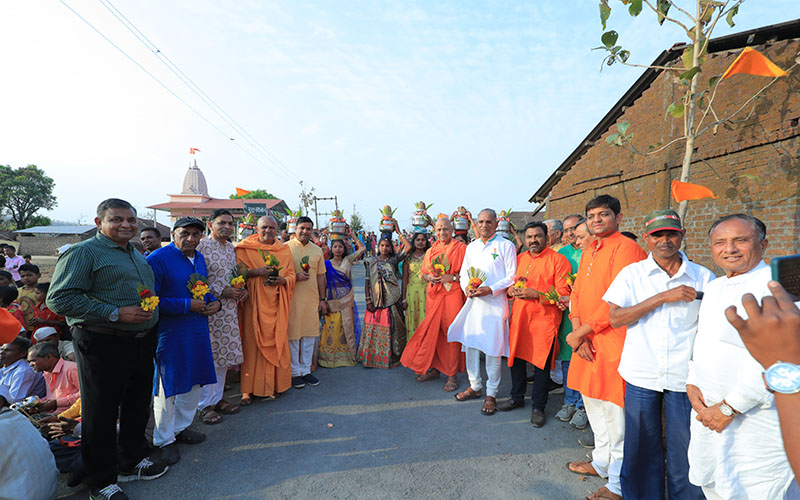 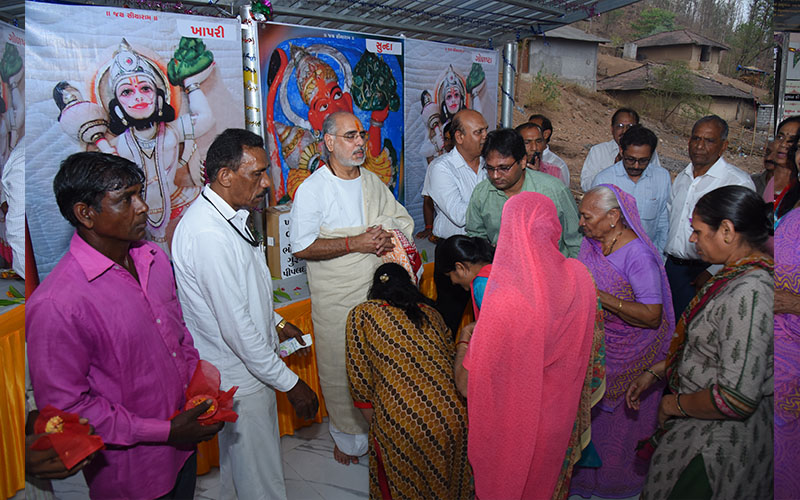 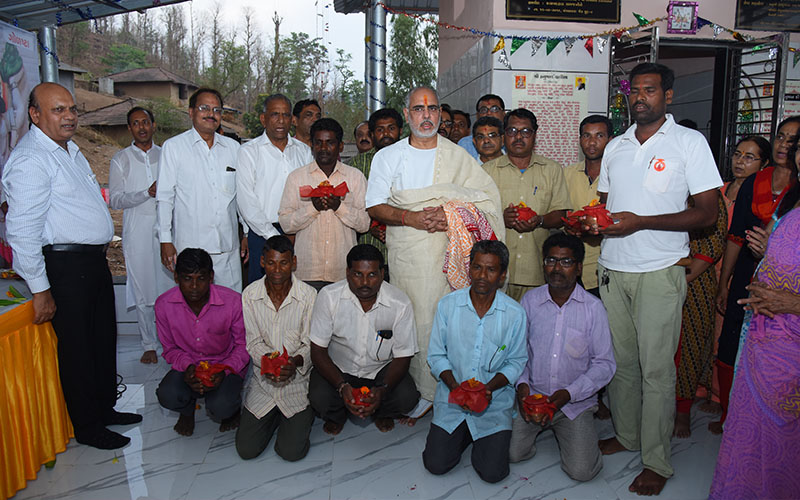 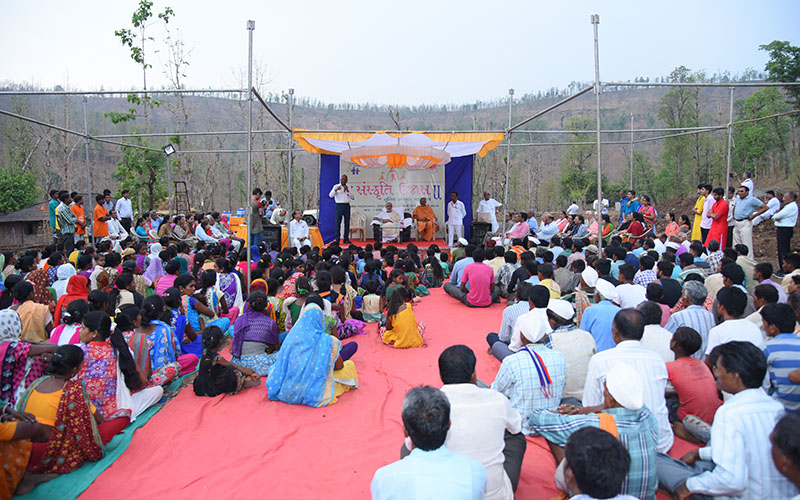 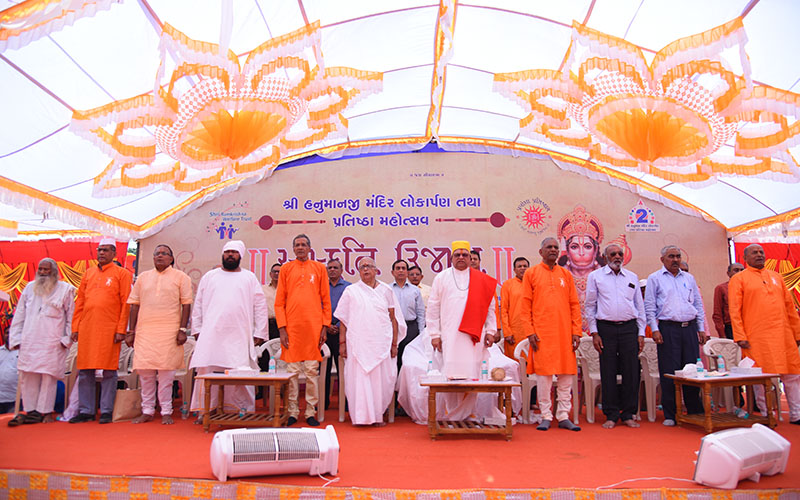 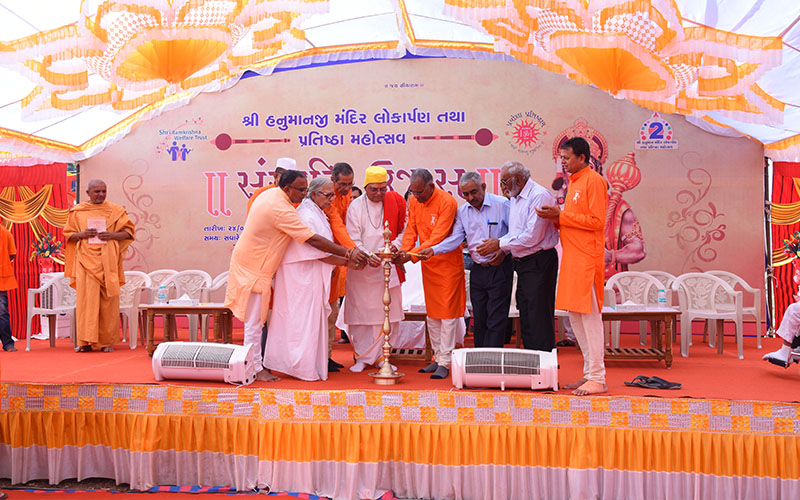 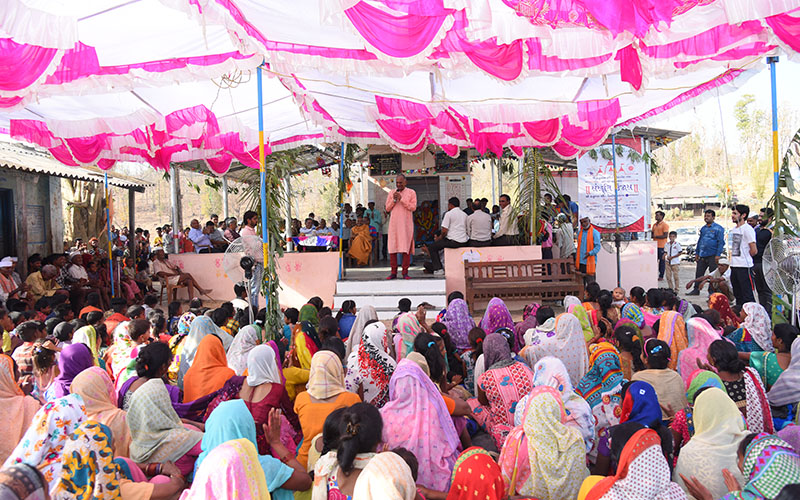 Shri Ramkrishna Welfare Trust, with a resolution to build 311 Hanumanji temples in the Dang district, initiated the construction of the temples. With respect to that, the inauguration ceremony of  the 4th phase of 14 temples was carried out on Sunday, 20th March, 2022 at Subir taluka’s Lahan Jhaddar (Nani Jhaddar) of Dang district in the presence of Shri Govind Dev Giriji Maharaj (Treasurer of Shri Ram Janmabhoomi Teerthshetra Trust,).

Govind Dholakia, the pioneer of this initiative, noted that Dang district present in the lap of nature, along with the people of Dang are one of the outstanding creations of nature. The land of Dang which is covered by jungles, hills, valleys, holds glorious religious heritage and is sanctified by the footsteps of Shabri Mata and Lord Rama is also known as Dandakaranya. Lord Hanuman, the devotee of Lord Ram, is worshipped as the omnipotent God by the people of Dang. For awakening social consciousness of about 2.5 lakh forest dwellers settled in Dang, an initiative named” Dang Prayag Hanuman Yag” has been started. The Hanumanji temples will prove to be the mingling point of good learnings of devotion, service, remembrance apart from ensuring unity and liberation from addictions for the people of Dang.

Shree Ramakrishna Welfare Trust since last 28 years, is conducting medical camps in the tribal areas with nearly 100 doctors.  Medical services, clothing donations, educational kits, deliveries of necessities for children, and everyone are being provided in the various villages of the Dang district. But at the same time, this initiative of constructing temples throughout Dang has been started with the aim of maintaining the unity of the village and preserving our basic culture from generation to generation. Not only a single person, but every villager is required to contribute something as a donation.

In this initiative, apart from Shree Ramakrishna Welfare Trust, whoever or whichever organisation donates something in the remaining 50% part, a plaque bearing their name is affixed. Once the temples are constructed, their complete management will be in the care of the villagers. In the year 2018, 6 temples were inaugurated in the gracious presence of the famous storyteller, Moraribapu during the first phase. Then after in the year 2019, 11 temples were constructed, and they were inaugurated by Mahant Devprasadji Maharaj of Jamnagar Anandabawa temple. In the third phase in the year 2019, 4 temples were inaugurated with the blessings of Bhagavatacharya Pujya Rameshbhai Ojha. During this fourth phase, in the presence of Pujya Govinddevgiri Maharaj as well as various social and political leaders, the inauguration took place.

Cultivation of the Idea

In August 2017, while travelling by car through a village with P.P. Swamiji, I noticed an idol of Lord Hanuman kept under the open sky and standing with the support of a tree.

Seeing the idol, I said, “Swamiji, does it look appropriate with our cultural values to keep our God in this manner?”

On hearing this, P.P. Swamiji’s heart melted and he replied, “Govindbhai, this is the situation in almost the entire district of Dang…! There’s a lot that needs to be done… But how much can be achieved…? And who will help achieve…?”

At that time, with utmost respect I said to P.P. Swamiji, “The Lord has blessed us with a lot and I would like do as much help as possible by building temples as a gesture to thank God.” P.P. Swamiji readily agreed, and we decided to construct temples in approx. 311 villages of Dang district.

We realised that if we build the temples ourselves, then it is possible that we will feel great pride about it. If we can be collaborators contributing 50% of the cost of building temples, then together we will be able to successfully conclude the project. Thus, with the help of donors, the temples are being constructed.